Skip to content
Posted inAnimals
Posted by By admin September 10, 2015No Comments 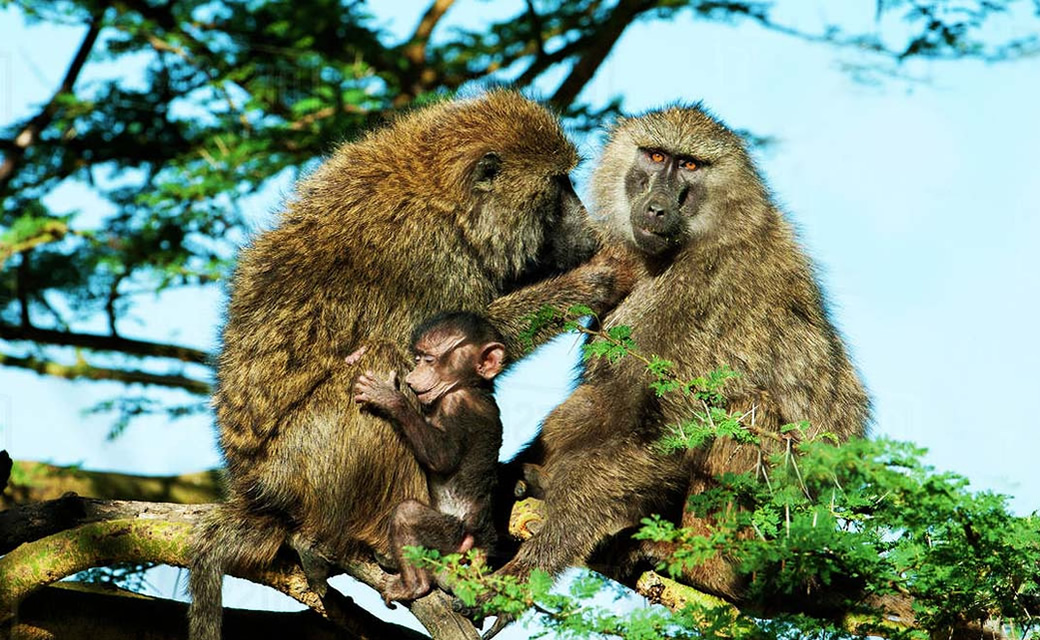 You always imagine monkeys being cute cheeky rascals playing in the trees but did you know that there is a monkey in Africa with canines larger than a lion and well prepared to use them. Well there is and it is the baboon of Africa.

Baboons are very intelligent and crafty ground dwelling primates belonging to the family Cercopithecidae and the genus Papio. They mostly reside in parts of Africa like Uganda, Kenya, South Africa and Tanzania and also in the south-western zones of Arabia. All of them are similar in their appearance in that they have heavy powerful jaws with close-set eyes, a short tail and rough spots on their protruding buttocks. Baboons are considered as one of the most successful African primates which are not exposed to any forms of threat or danger. This is mainly because of their opportunistic lifestyle which leads them to areas that are even taken over by human settlement.

Highly opportunistic eaters, baboons will eat almost any food they come across including grass, tubers and roots but like many things in Africa they have a predator streak and will eat small mammals such as ground-nesting birds, hares, and even young antelope, yes, young antelope! One interesting phenomena is that you often find impala and baboons coexisting. The reason for this is unclear. Baboons are more vigilant and impala may benefit from their more acute senses in spotting potential danger but they pay a price for this. Sometimes, the male baboons will eat young impala. The impala drop their young after the first rains and there are usually large numbers of very young calves around. The baboons have been known to grab the baby impala, kill and eat them, yet the impala herd does not show any distress over this. Sort of like a Mafia protection racket in the African bush.

A startling baboon fact is that they are quite effective fighters and they will not typically back down from a challenge, even when the animal is much larger. In fact, they have even been known to stand their ground when feeling threatened by humans and I have often been warned off by a troops of baboons while on a bush walk if I get too close to their roosting tree. They are also quite sexist and there are many stories of baboons not moving at the approach of a famale human but only when the man approaches will they bother amble off. This could be due to the fact that hunters are mainly men and they have learned that they are the more dangerous of the species. Their main predator however is the leopard but not everything goes to plan, and it often happens that a leopard is killed in a fight with one or more baboons. Baboon’s canine teeth are longer than those of a lion, and they will use them if they need to. Before resorting to fighting, however, baboons will try to scare of predators with loud vocalizations and by striking their most intimidating poses and this can be a very noisy affair indeed.

A baboon group’s hierarchy is such a serious matter, some sub-species have developed interesting behaviors intended to avoid confrontation and retaliation. For example, males have frequently been documented using infants as a kind of “passport” for safe approach toward another male. One male will pick up the infant and hold it up as it nears the other male. This action often calms heated nerves and allows the former male to approach safely.

All this may lead you to think that this is an unsavoury character in the African bush and one you probably wouldn’t like to encounter while on safari but bear in mind that they probably represent the closest we will see of the traits and characters the earliest humans displayed when we left the trees in these very same areas of Africa millions of years ago and can therefore offer us a unique insight to the development of mankind.

Serengeti More than Safe Despite the Drummer of tourists & Lions