Skip to content
Posted inAnimals
Posted by By admin September 24, 2010No Comments 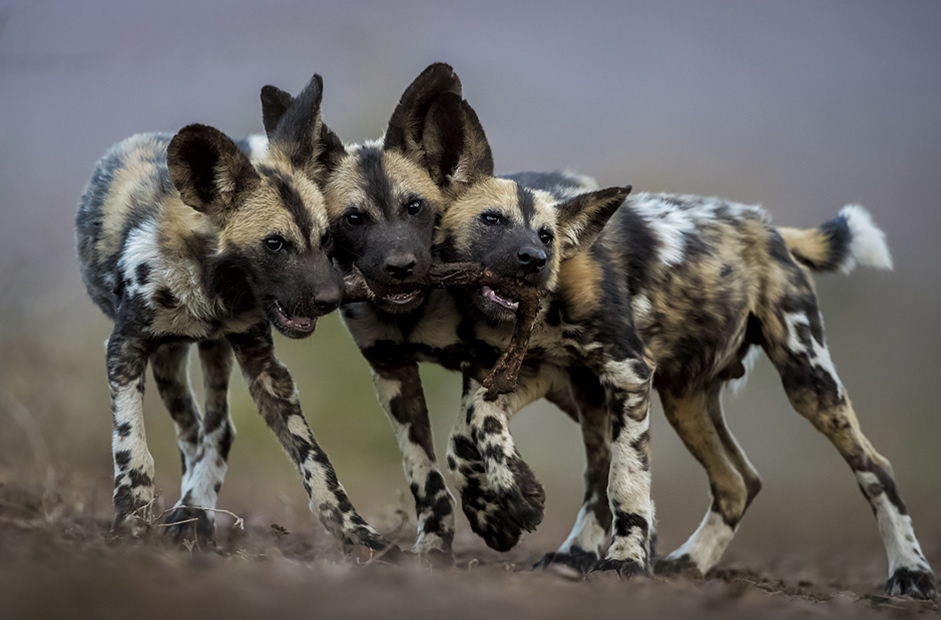 Of all the large land predators encountered while on African safari, the wild dog is the most successful hunter with an average of 80% of its attempted hunts resulting in kills compared to 30% with lion prides. Wild dogs hunt very efficiently as a pack and rely more on stamina than they do on strength and speed. Once the prey has been targeted, the dogs then take turns in chasing after the animal at a fairly constant speed of 60 km/hour. The running prey is often forced into the direction of other members of the wild dog pack, who wait ahead to have their turn in chasing after the prey. The hunted animal, exhausted from all the running slows down or stops, giving the wild dogs the opportunity to grab hold of it with their powerful jaws which they then use to tear off chunks of flesh resulting in the prey dying from loss of blood and shock.

Although the are the most successful at hunting, a sad fact is that the way they killed was deemed as brutal and cruel in the past resulting in them being shot at sight even in Game Parks and Reserves. The famous African writer Sir Laurens van der Post related how a friend with whom he was driving through the Kalahari suddenly leaped from the vehicle and shot five wild dogs because he considered them to be destructive vermin and a 1956 report by then director of Uganda National Parks spoke of wild dogs “killing wantonly, far more than they need for food and by methods of utmost cruelty. They do not kill quickly as the lion does … whenever they enter a particular stretch of country the disturbance they cause is so great that, for the time being, all buck are driven out. A particularly unpleasant characteristic is that they will without hesitation turn upon any member of the pack that falls by the way through wound or sickness.”

For most of the year, wild dogs roam around over the plains and in the bush, usually not staying in the same place for more than a day. Hunts take place in the morning and early evening. Prey is apparently located by sight, approached silently, and then pursued at speeds of up to 66 km/hr (41 mph) for up to one hour. Pack members generally cooperate in hunting large mammals, but individuals sometimes pursue hares, rodents, or other small animals. The daytime is spent sleeping, usually in the shade of a tree or near water, with members of the pack lying very close together. Once a year the pack occupies a den for 2 – 3 months, to bear young. The den is usually an abandoned aardvark hole.

Wild dogs are social, communally hunting carnivores, which live in small cohesive packs typically composed of a dominant breeding pair, a number of non-breeding adults, and their dependent offspring. Within the wild dog pack all the males are related to each other, and all of the females to each other but not to the males. Females migrate into the pack, whereas males usually stay with their pack. Only the highest-ranking male and female normally breed, and they inhibit reproduction by subordinates. Pack size ranges from 2 – 43, with the average number usually between 8 – 11.
The African Wild Dog is one of the most endangered of all African mammels due to human overpopulation, habitat loss and hunting. It uses very large territories (and so can persist only in large wildlife protected areas), and it is strongly affected by competition with larger carnivores that rely on the same prey base, particularly the lion and the spotted hyena. Lions often will kill as many wild dogs as they can but do not eat them. Hyenas usually follow them to steal their kills. One on one the hyena is much more powerful than the Wild Dog but a large group of Wild Dogs can successfully chase off a small number of hyenas because of their teamwork. Most of Africa’s national parks are too small for a pack of wild dogs, so the packs expand to the unprotected areas, which tend to be ranch or farm land. Ranchers and farmers protect their domestic animals by killing the wild dogs and bringing this animal closer to extinction. What a place Africa would be without it’s only resident hunting dog but just be going on safari as a holiday option rest assured that the money you are putting into the economy helps restore former farmland into game reserves thus helping to protect them.

The tree that whistles at you

The Waterbuck – so smelly that a lion won’t eat it. Well not really