Skip to content
Posted inAnimals
Posted by By admin April 26, 2020No Comments 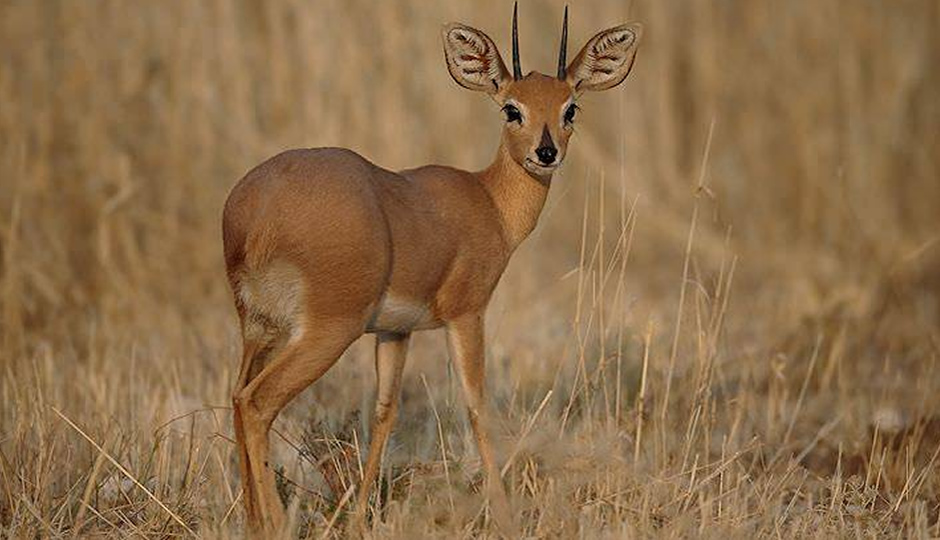 Probably the nicest little guy to come across while on African safari, Steenbok are regulars around my house in Marloth Park beside Kruger Park. Steenbok are petite antelope, with long legs and an upright stance. The coat is usually a light golden-brown color, although there is some variation among individuals with some being quite reddish and others more gray. The undersides are always white. Steenbok have a few distinctive markings though with large eyes are ringed by a fine circle of white hairs, and there is a slender black triangle which starts at the nose and tapers upwards. The ears are extremely large and the horns, found only in males, are straight, sharp, and very upright.

They tend to be most active during the day, although when temperatures peak at midday they will seek refuge in shade of a tree. This species live in monogamous pairs which share a territory some 4-100 hectares in size – however, the two animals are usually solitary and only come together to breed. The territory is marked by both sexes by using dung heaps. When threatened, steenbok will hide by lying on the ground and freezing in order to avoid the danger. If the threat continues to approach, they will rocket away for a short distance and then try to hide again.

Apart from their beauty there is also something that grabs you when they just stand and almost stare you out. I always felt that there was something strange about their apparent lack of fear and it wasn’t until I read The Heart of Darkness by Laurens van der Post that my suspicion was confirmed. In the book he had been exploring the Kalahari Desert trying to meet and learn about its indigenous people known as Bushmen. On their way home, they ran into a small band of Bushmen who were determined to reach a distant stormfront for the salvation of rain. To Van der Post the Bushmen seemed half starved, so they decided to use their vehicles and rifles to shoot some game for meat to help them on their journey. There was very little game to be had as it was in the middle of the dry season, but at one point they came across a Steenbuck. Van der Post didn’t want to shoot the beautiful animal, but, “Remembering the gaunt faces of the famished Bushmen, I shot quickly before he should get alarmed or the sight of his gentle being weaken me. I would not have thought it possible I could miss at so short a distance. Yet I did.” He emptied his magazine at the Steenbuck to no avail, and another hunter took a shot, only to nick the animal’s ear, at which point it bounded away into the bush and away.

To the Bushmen who were delighted with this outcome of this affair, this wasn’t the least bit surprising, because they believed the Steenbuck was protected by magic. “The Steenbuck is protected with great magic and very difficult to kill” they claimed. Many times had they shot an arrow at one, only to have it seem as though their shooting arm had been jostled at the last minute, causing the arrow to fly off the mark.

If you are ever on safari in Africa and you come upon one of these delightful creatures, remember this story when looking into it’s eyes and then try and tell me that there isn’t something there!

The Martial Eagle: The largest Eagle in Africa

If you thought white lions were rare, see the King Cheetah