Skip to content
Posted inBirds
Posted by By admin November 23, 2019No Comments 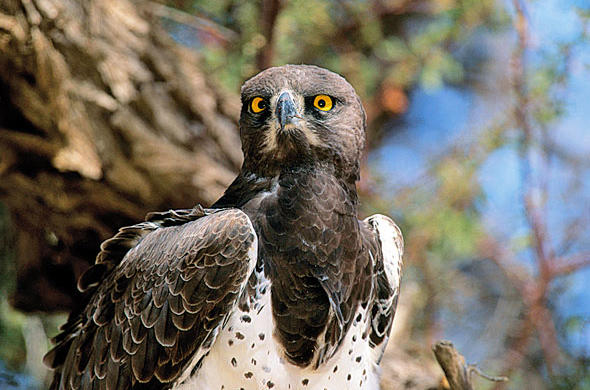 We have discussed plenty of mammals in Africa but have maybe neglected the reptiles and birds. Well let’s go back to birds as bird watching is one of the biggest hobbies worldwide and let’s go straight to the big boy. The Martial Eagle, the largest eagle in Africa and one of the most impressive birds to encounter while on safari.

With a wingspan of 6 foot these incredibly powerful birds reputedly have enough power in one foot to crush an impala skull, killing instantly. The upperparts are dark brown with a white belly with black streaks, the legs are white and has very large talons. This bird spends much of its time on the wing, and is usually seen soaring about hill slopes, often at a very great height rendering it almost invisible to the naked eye but if you are lucky early in the morning before it takes to the wing for the day, or in the evening prior to roosting it can be seen perched in trees making for an unbelievable spotting and great photos to boot.

The diet of the Martial Eagle is quite varied mainly due to the fact that with its size and immense strength it can take both small and medium sized prey. In some areas birds form an important part of the diet, including guinea fowl, francolins, bustards, and poultry. Birds even as large as a European Stork are recorded to have fallen prey to the Martial Eagle. In other areas the diet is largely mammalian, especially hyrax and small antelopes with prey as large as Impala taken. Some specialise in monkeys but again they take what they can find. Other carnivores are not safe from this terror bird either and mongooses are sometimes taken, with even the occasional Serval Cat and Jackal and also a few snakes and large lizards.

The largest eagle in Africa, this is a bird of the uninhabited stretches of thorn bush and savannah found over much of Africa, occurring also in open plains and semi-desert country. A pair of Martial Eagles may have a home range of anything up to 50 square miles, and they wander about over most of it. They often hunt for several days in one area and then move on to another, since complaints of kills are often voiced for several days in succession in the same area. It is much shier than the other big eagles of Africa, and generally keeps away from man.

Most Popular Congo Safaris to Book in 2019

The Steenbok: My favourite African Antelope