Skip to content
Posted inWhat to Do
Posted by By admin June 14, 2018No Comments 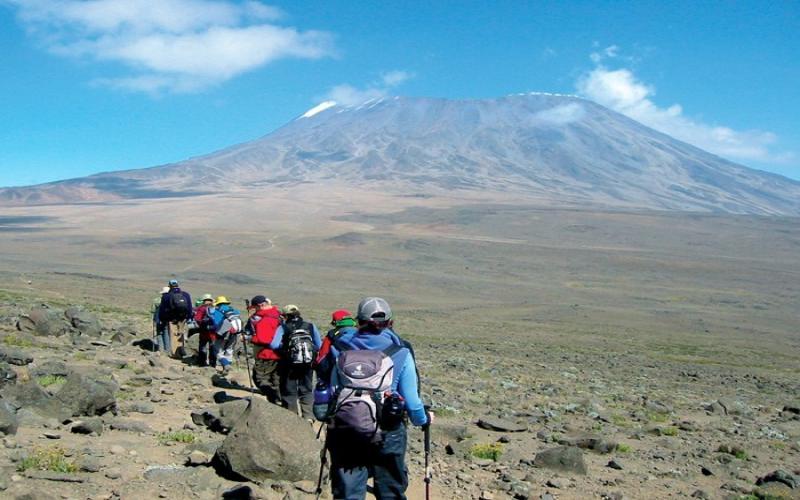 Typically, it takes most adventurers 8-9days to conquer Africa’s third highest mountain, Rwenzori (standing at 16,762 ft. above sea level). Having rocked the experience in five days and four nights, I expected to humble Kilimanjaro in a maximum of four days and three nights. See, it is considered to be a smoothie compared to Rwenzori because it doesn’t require technical hiking skills. Alas! Kilimanjaro instead humbled me before accepting my plea to summit it to its highest peak, Uhuru. However, it was worth it.

A side view of Kilimanjaro National Park

24th August 2016, 10:00am. That was the time I and my pals—Joy Mirembe and Jeff Wu set foot on the soft soils of Kilimanjaro National Park—ahead of our hiking expedition. Baba Kilimanjaro, a Tanzanian based Safari Company and mountaineering company is the agency with which we were to accomplish the mission.

There were two kinds of routes to take. The easy ones, and nerve-wracking types respectively. For having a gradient that can be slayed even by a staggering drunkard, the former as we would learn is nicknamed Coca cola route. In contrast, the latter is cursed as Russian-Gin-route for its utter steepness that leaves many cursing and begging for mercy.

We didn’t want much trouble and thus chose the former. In the start, it was a lazy walk under the woods and over bridges that vented water from as far as the remaining glaciers at the top. The forest was quiet and moist. Being an afternoon though, there weren’t as many birds in sight. However, there were plentiful of gigantic trees to leave us in awe. On the whole, there was nothing tiring about the walk. I guess this was because the caretakers had freed us of the burden of carrying our weighty bags. This help made it effortlessly easy for us to reach the first camp sooner than we had wished (in just three hours). Seated at 2,715 meters above sea level, Mandara was its name. It featured a collection of gorgeous wooden huts well insulated to shelter one from the dropping temperatures of the surrounding rain forest.

The second day of the excursion was all about journeying through the heather zone and moorland. The height of the trees lessened as we gained altitude. Its footpath was well maintained and thus less challenging to maneuver. Being a dry season, it was dusty. Luckily, the wind was too calm to blow it (dust) in our faces. I couldn’t be happier that the team wasn’t rushing the walk. They were taking it nice and slow. This enabled me make the most of picturesque encounters along the way. Different shades of vegetation and flowers abound like a rainbow across the Kilimanjaro’s open fields.

From the bottom, the mountain which is hiked by over 50,000 adventurers every year looked like a solid gigantic block. This isn’t what seemed like from the trail. It was a collection of gently sloping hills, some of which used to act as sacrificial alters where the Wachaga tribe used to offer sacrifices to appease their gods.

Whenever tired, we would take a rest in the elephant grass. It was so spongy, wild and seemed unconsumed for many years, a clear indication that it had been so long since elephants had been here, probably due to extinction. How sad.

By far, the mountain presented itself as a place of wonder, mystery and legend. I saw more of its hidden beauty, spirit and majesty in the eyes Harpson (one of our guides) as he spoke about it with so much passion.

The biggest highlight of the day was entering into the cloud zone. They looked like floating giant cotton balls.

About the bathing…. FEAR kept roaring through me whenever I imagined taking a dip in an environment whose temperatures fluctuate between 2-6degrees. Wiping my body using a towel dipped in warm water in the most I could do to freshen up.

On the 26th, we awoke celebratory Swahili songs of other caretakers singing for clients as they touched base at Horombo the camp. They had finished conquering the three dominant peaks that make Kilimanjaro in nine days. It was an energetic performance peppered by stamping feet and clapping thunderously. The one thing most of these victors had in common was a burnt skin and cracked lips. The sun hadn’t been so kind to them. Fear threatened to swamp what little composure I had left at this sight. I needed no warning to understand that we were headed for the thorny chapter of the expedition. Indeed, it was very hot as our battalion of adventurers matched through an utter desert. A land that was once carpeted with snow before global warming reproached the mountain.

To make it through, water came in handy as our medicine.

On the whole, the most surprising part of the adventure was that despite being away from Kampala, I was still able to run business and family affairs in real time all thanks to International Airtime Top Up’s reload services. Imagine the possibility of being over 16,000 feet above sea level and still being able to get airtime top up amount instantly, to make calls, send and receive SMS, email and videos, use social media and browse the internet whenever need arises.

When it comes to mountaineering, safety is everything, and I couldn’t be happier that Baba Kilimanjaro had been paying extreme attention to our safety throughout the previous days. The last phase of the adventure wasn’t exceptional. Each of us was availed additional warm gear ahead of our ascent to Uhuru peak, the final lap of the hike.

Considering how steep its gradient was, its departure was planned for 4 am. That way, we would make it to our destination before the punishing sun took toll of the day. Torches with head lights and gaggles with strong night vision were our pathfinders in the darkness. Due to lack of vegetation, the lack of oxygen became real as we disappeared past cloud level. My feet became heavy. However, I am not the only one who had been pushed to the limits. In a distance, I could see a hikers who were breathing deeply to fill their lungs with oxygen.

We couldn’t be more depressed meeting half cheerful folks who were making their way from the mountain. Their body language dryly made it clear that we were finished. Our eyes darkened and smiles faded. Joy’s mouth went dry and her hands clenched. Cold sweat popped out of my chilled skin as I pictured myself throwing in the towel with no more thought than you would give pulling weeds.

Luckily, Alex our Team Leader was not ready to take our no for an answer.

“Listen to your heart, get up and keep going, it is not over. But it’s about to be.” He said as we got back on our feet to cover the remaining one hour journey from Gilman’s peak to Uhuru.

Reaching the crest of Uhuru peak was such an inspiration. My lungs were searching for air and overflowing with happiness not because I had made it so far, but rather because before me was the most beautiful creation I have ever known, the golden sunrise, Africa’s hallmark. Even better, I was beholding it at the highest point in the continent, 19,341 ft. above sea level. You have to see it for yourself one day.

Carry with you enough warm gear that can sustain the body at winter temperatures. Temperatures drop to negatives as one ascends past cloud level (starting 2,500 meters above sea level).

Hiking Kilimanjaro costs between $1200-$1600 depending on tourism season. This fee covers for full board experiences throughout the six day adventure.

The best time to hike Kilimanjaro are warmest months. These run from January through mid-March. In the wet season, the floor of the mountain is slippery and thus hard to maneuver over.

The adventure is pre-booked.

Guide to Climbing the Kilimanjaro Mountain