Skip to content
Posted inAnimals
Posted by By admin November 14, 2011No Comments 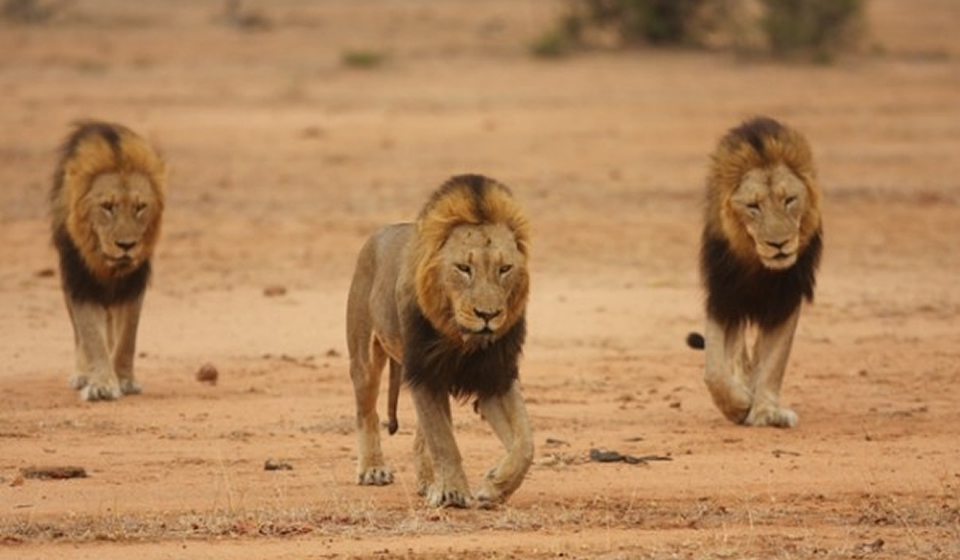 “Imagine coalitions of up to six male lions securing territories, and commanding them with mob justice and savage intensity. This is what is happening in the greater Kruger National Park (KNP), specifically in the Sabi Sands game reserve. Here, there are not one, but three coalitions that are waging war in a territorial battle that has lasted the last year”

Lions (Pantheraleo) illicit a different response in everybody. One thing that we all feel when we see lions is their size, strength and family unity. The pride bonds that are seen can be compared to our own experiences, and the love and devotion of pride females to each other and their cubs can be understood by all the mothers that walk the earth.

My experience or initial initiation into lion pride behaviour was the same as we all have. A group of lionesses and cubs, accompanied by a majestic male, ultimately form the lion pride that we all think we know. But what we don’t understand is the role that male lions play in the pride make-up. It is not as simple as we all think as we have to look at it from both the female and male points of views. Generally, the lionesses that form the core of the pride are very separate from the males. They are made up of sisters, aunts, mothers and daughters, and essentially make up what we know as a lion pride. They will generally stick together for life, unless circumstances such as drought, competition or pride dynamics force them to leave. They will fight for territories with other female core prides, and secure an area of acceptable size to command. Males will attempt to secure territories as large as they can, and as such become the pride males. This is often not limited to one pride, and if they can, they will take over huge areas to take over as many female prides as possible. This is why male lion coalitions form, as more males means more power and strength, which increases the size of territories and consequently female prides.

If you have been lucky to see one male lion, you will never forget his size, grace and beauty, combined with the supreme confidence and air of supremacy they demand. Now imagine coalitions of up to six male lions securing territories, and commanding them with mob justice and savage intensity. This is what is happening in the greater Kruger National Park (KNP), specifically in the Sabi Sands Game Reserve. Here, there are not one, but three coalitions that are waging war in a territorial battle that has lasted the last year. There are the notorious Mapogo, Majingalane’s and the Matimba coalitions. The Mapogo coalition (six male lions) is the oldest and current established coalition. I was personally lucky enough to spend three years with these magnificent beasts, and I will never forget the first day I saw all six of them strolling into the reserve where I worked. They walked in as adrenaline filled, testosterone fuelled beasts with the confidence of old soldiers. They annihilated the old dominant males, and proceeded to take over all of the prides in the Northern and Western Sabi Sands. They killed many cubs, protective lionesses and other male lions that stood in their way.

Six years later, they have sired many cubs, have been the most accomplished big game hunters I have heard of and have become legends. Now, battled scarred and weary, but soldiering on, their reign is now being challenged by the Majingalane coalition. They have been whittled down to three members, as two members were killed by the Majingalanes, and the cause of the thirds death is unknown. The Majingalanes are four males strong, and so like the kings they wish to oust, the aggression and strength they exhibit will surely lead to them reigning over the Mapogos territory and their females. They have made inroads into the Mapogos territory, and are applying pressure whenever they can. It will surely not be long when the old kings are replaced by the younger, stronger princes. There is however another possibility. The Matimba coalition of six males that are from the KNP, have been seen bordering on the territories of the Majingalanes and the Mapogos. They have not made any moves to secure these territories, but only time will tell if this large coalition will play a part in the current battle.

All that we know is that these coalitions have given us amazing viewing and some phenomenal insights into lion behaviour. With the global populations of lions dropping to only 20 000, interactions like these might not be witnessed by our children and grandchildren. It is so important to understand these interactions and to visit these reserves, which keeps their populations safe and stable.

Great Picture of Lions in Camp